No barriers between Quran and Pakistan in KPK

No barriers between Quran and Pakistan in KPK

The Prophet Muhammad (s.a.w) said, “The best of you are those who learn the Qur’an and teach it”

We congratulate CM KPK Pervaiz Khattak along with his team and Imran Khan for this great step. Quran has the knowledge we are missing as a nation and ummah. There is nothing better we can learn.

Most of us can read Quran but only a few can understand it word by word.  The reason we learn English as a foreign language but not Arabic. In future may be we learn English and Chinese both.  Strangely we were only taught to read and memorize Quran missing the meaning of what we are reading.  Isn’t it sad and ironic that even if one can read but can not understand it.  That is what we think is the biggest thing keeping us back from benefiting truly from the teachings of Quran. We think may be if is part of some big conspiracy to keep us ignorant from the real meanings and teachings of Quran?

Allah SWT repeatedly challenges mankind in Quran to think and think deeply on the teachings of Quran.  But how will we think if we don’t even know the meaning of what we are reciting?

It (the Qur’an) is a Book We have sent down to you, full of blessing, so let people of intelligence ponder its Signs and take heed. (Surah Sad: 29)

World scientists from the west have researched and learned from Quran. It tells us about things which we’re not known 1400 years ago when Quran was revealed. From human birth to what is outside in the skies,  now we understand with modern sciences. We as Muslims should have been the ones to learn Quran best and understand it. However this seems possible now with the revolution in KPK education system which will InshaAllah come to other provinces as well. 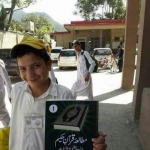 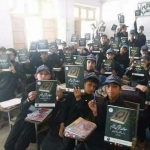 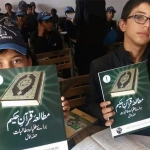 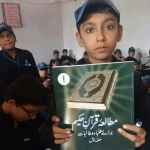